La Comida was founded on February 15, 1968 in Chico, CA. by Michael Pavis. Before it was La Comida, Mr. Pavis was the manager of a restaurant called Senor Campos. After only a few months, Mike had purchased the restaurant and changed the name.

The food was next to change. With little experience in Mexican food, Mike consulted with employee’s, friends, and friends of friends. He experimented with many recipes before La Comida evolved into what you see today. The spices for the beef and enchilada sauce are a secret recipe made exclusively for La Comida by Farmer Bros. Coffee Co.

Mike worked day and night for many, many years and developed a loyal following that today spans several generations. His greatest joy came in the dining room. He was the ultimate host, making all who came feel welcome. He played with and endlessly teased all the kids who would come to eat. Many children came to know him simply as ‘Grandpa Mike’.

La Comida continued to grow throughout the 70’s and 80’s. Those children that Mike loved to play with now bring their children,and grandchildren, in to enjoy the same food that they have for so many years.

During those years, La Comida grew and expanded greatly. Mike opened several more restaurants in Paradise, Marysville, and Sacramento, among others. La Comida Restaurants could be found as far south as Atwater, CA. and north to Kennewick WA. He helped many people get into the restaurant business and flourish for many years.

Little has changed at La Comida for forty plus years. In the 80’s and 90’s Mike’s son, Mike Jr., became very involved in the family business. Mike Jr. would eventually take over the daily operations, leaving Mike Sr. time to play golf and travel. He would, however, never stop working. He would continue to spend his evenings in the dining room, playing host and teasing the kids until his final days.

Mike Jr., and many long time employees, continue to operate La Comida in the same fashion as our founder.

We think he would be proud. 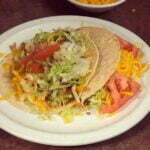